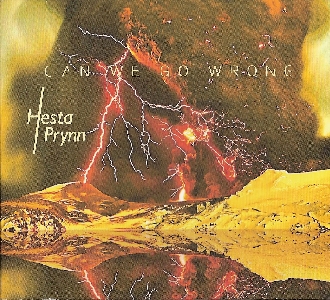 Can We Go Wrong EP

Hesta Prynn’s first solo album(EP really) was just released on July 6th and I am quite liking it. She clearly understands what makes a catchy pop song. Yet at the same time keeps the same deep content you might expect from a true artist in the “underground”.  With her unique voice and a indie rock band sound you will not be left with that hallow feeling most songs currently on the radio leave.  It is a fun, welcoming sound that might remind you of the Ting Tings or maybe even the White Strips. Also, you can hear the influence touring with Tegan and Sara when with Northern State has had on her work.

You might recognize Hesta Prynn(Julie Potas), as a MC from the band Northern State. Northern State, a 3 woman hip hop, indie rock group, has been fairly successful with 3 albums released sense 2002 when the group formed. If you enjoyed their last album “Can I keep this pen” I think you will love this new work. Each of the band members has decided to release their own solo albums, and Hesta Prynn’s will be the first released. As much as I like this solo work, I hope they continue to collaborate for Northern State in the future also.

Like any EP, it is a short 6 track set, that seems to fly by in no time. It gives me high hopes though for the full length album to follow this year. Songs like the title track are sure to get stuck in your head in that good sort of way.

You can buy the digital version of this EP and get 2 free bonus tracks for $3.99 at her website. Including a great cover of Pepper by the Butt hole Surfers. Check it out.

This entry was posted in Music and tagged Can we go wrong, Hesta Prynn, Music, Northern State. Bookmark the permalink.