This week my friend Kevin bought a very cool little trailer, and Ryan and I went with him to pick it up. Check this beauty out! Made from a Nash Metropolitan convertible from the late 1950’s, it really catches your eye! 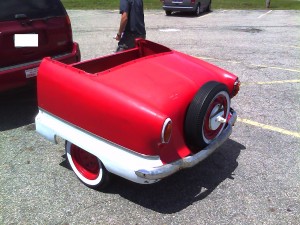 Although it is sad to see the rest of the car gone, I am glad this much still looks so good!

The Metropolitan was an interesting, innovative car. It was actually manufactured in the UK by the Austin car company, in order to keep costs down and imported. This now a common practice, but in the 1950’s it was not. It was one of the first cars marketed directly to women(Miss America was the cars spokes woman), and in a time when most american cars were huge and did not care about fuel use, this economy car could get 30+ mpg. It also was an early unibody style car, that if you could see the front tires here, you would see had them fully inclosed also. (The car always reminded me of a very cool bathtub on wheels!)

It is hard to tell the year with the front of the car missing, but it might be a third generation model. They were not available in two tones until  late 1955. It does not have a trunk lid, so it must be pre 1959. 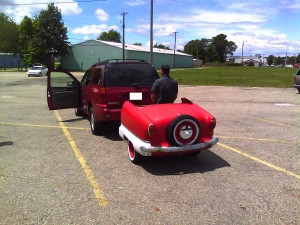 For scale, you can see Ryan leaning against it. Notice how little of the parking spot it takes up!

And although the song was about a Rambler… We thought of this as the little red Nash speed behind us….