A few weeks back, I was lucky enough to get a broken Makerbot replicator for a good price (Thanks Sean!!!). It is an original R1, first generation, you know the wood one, that was still open-source. The board had blown out due to a static discharge. Replacement mightyboards from MBI are insanely expensive, so I had two options. I could retrofit everything to be compatible with other RAMPS systems, or I could buy a mightyboard knock off on ebay. I had planed on going the RAMPS way, but due to the bed, heater, and LEDs all being 24v, and the fact it used thermocouples vs thermal resisters, I decided it would be more work to replace it all. It may have been wrong. 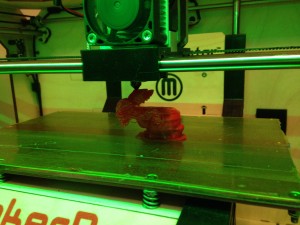 It’s ALIVE! First print! I had to adjust the belt, as you can see it slipped. The second print worked great!

The original MBI mightyboard Rev E had some major issues. Before they shipped them, they made a few mods/fixes, and then it still had a few more issues. One of those is why the board blew in the replicator I picked up. The best route is to buy one of the upgraded boards. They include all the fixes and then some, BUT they are not cheap, around $175-$250. Once again, in hindsight this would also be a better route then I went with.  I found a VERY cheap knock off on ebay made by GeeeTech for less then $100, it included a new screen, new thermocouples and new stepper drivers! It had free shipping from China and arrived in less then 3 weeks, which was not to bad. Unfortunately it was based off the un modded REV E mightyboard. So it did not even have the mods made by MBI at the factory. So I decided to do those mods, and add a number of others to keep it from blowing in the future.

Here is what I did:
1. Bypassed the unimplemented safety cutoff circuit (MBI mod)
2. Cut the trace to the 3.3v voltage divider  (MBI mod)
3. Replaced the LM1084 5v voltage regulator with this one: http://www.digikey.com/product-detail/en/R-78E5.0-0.5/945-1648-5-ND/2834904
This is the main mode to keep the board from blowing out, the origonal 1084 was already at it’s max, so any overload and it would blow, dumping 24v into all the lower volt parts of the board.
4. Installed a jumper from the new 5V DC converter to the 3.3v divider, so it would not over heat going from 24 to 3.3v.
5. Cut the white(5v) wires going to the end stops. This is another source of 24v going into the 5v rail, and it only is there to light up the LEDs on the end stops.
6. Upgraded the PSU. The original power supply did not have a proper ground, it was slightly underpowered and it was an annoying separate block. I got this one, which was a much more stable voltage. DC 24V 15A Switching Power Supply
7. Switched to stepper drivers to FlashForge A4988 botsteps. Thanks so much to Dan Newman in the Makerbot users group on google! He shipped me 5 for just the cost of shipping!
8. Replaced the flaky thermocouple with a nice new loop mount one. 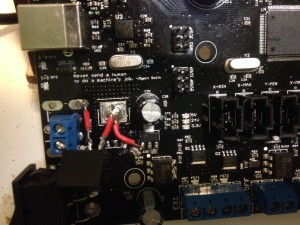 You can see the modded board here.

The excluder had already been upgraded from the unreliable original to a newer model.

After all that I was extremely excited when I was able to fire it up and start printing!