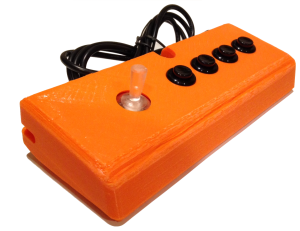 The Vectrex arcade machine is still one of the best ever made. It is also the only home arcade machine that used a vector display and therefore can not be experienced in an emulator to its entirety. It was launched in 1982 right before the video game crash of 83, and was largely a commercial failure unfortunately. That did not stop it from getting some great games and becoming a cult classic. Great new home brew games are still being made to this day along with other hardware upgrades. This was all possible because the original designers released all the information about the system after it was discontinued, way before anyone was open sourcing anything. In that spirit, I am releasing my replacement controller design as open source!

Starting today you can download the files in thingiverse and build your own, modify it and improve it. If you want to make and sell them please contact me first.

I have been making and selling them for a year + now and feel it is time to share the design with the world! Vectrex4ever!

Thank you for everyone that bought one.
I will keep selling them for $100 for those that do not want to or can not make them. It takes a good deal of time to assemble them, so I don’t make much profit per hour, it is a labor of love. I also include a nice box and extra parts. I can print them in any color.